WHEN GRADES COLLABORATE AND LEARN FROM EACH OTHER

Schools serving a student population that spans pre-K through Grade 12 can offer a unique benefit — the chance for younger and older students to learn with, and from, each other in meaningful ways.

GEMS World Academy Chicago, a premier private school that uses the International Baccalaureate curriculum framework, makes it a priority to create such opportunities. A recent collaboration between third-graders and seventh-graders was a powerful learning experience for both groups. 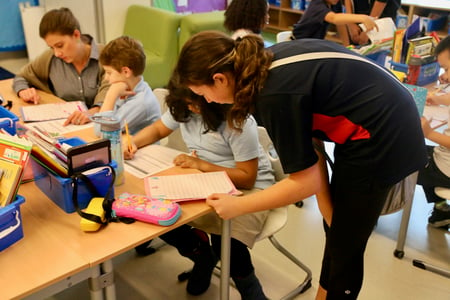 The third grade, which had recently launched its Explorers unit, was investigating the meaning of exploration and the consequences and responsibilities embedded in the role of explorer.

“When we learned that, we thought it would be great to try a 'social experiment' in class, so that all the students could have a better understanding of how some civilizations were decimated and their culture destroyed as a result of exploration,” Grade 3 teacher Georgia Pereira said.

The activity was simple. One group of seventh-graders entered the third-grade classroom and played the role of “nice” explorers. They were respectful of the third-graders and displayed sincere curiosity about the younger students’ work, asking questions about how they arrived at the choices they did, and why.

Later, a second group of seventh-graders entered, playing the role of “conquerors.” They dismissed the third-graders’ work as wrong, refused to have meaningful dialogue with the students and grabbed items off the desks and the shelves of the classroom to keep for themselves.

The third-graders were not told about the visits ahead of time. They were startled and in some cases angered by the behavior of the “conquerors.” 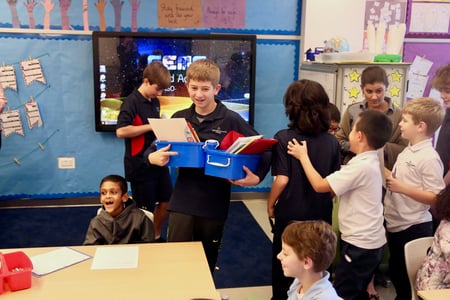 “The puzzled looks on our third-graders’ faces and the feeling of helplessness when the seventh-graders came into our classrooms was probably similar to what happened to the actual native peoples of places that went through exploration in the past,” Ms. Pereira said.

Students reflected on the activity as a group afterward. The third-graders connected what they experienced during the activity to parts of the world they knew had undergone similar kinds of exploration in the past (Africa, India, Australia). The discussed what it felt like to have their work dismissed and their belongings taken from them.

The seventh-graders connected the simulation to the conquest of ancient civilizations in Mesoamerica, GEMS Middle School teacher Jay Annadurai said. Her students talked about the role that power plays in exploration, and how easy it can be for explorers to let power “go to their heads.”

The seventh-graders also expressed a greater sense of the responsibilities inherent in working with their younger peers, Ms. Annadurai said.

Eila Kvaran, the IB and innovation leader at GEMS, said the activity stands as an example of the collaborative spirit that the IB curriculum attempts to create and nurture.

"This activity was deeply meaningful and mutually beneficial to both the third- and seventh-graders in ways that directly enrich our curriculum and their learning," Ms. Kvaran said. "It also allowed for very powerful reflections on the IB Learner Profile and attitudes.  As as one of the third-grade teachers said, this was a perfect time for her class to discuss empathy and appreciation, which can be tough for younger students."

As an independent private school, GEMS can build experiential learning activities around authentic applications of new knowledge, both in and out of the classroom. It can also bring students of different ages together as learners, demonstrating that we all have something to learn from one another.