HOW TO SPARK ENGAGEMENT IN YOUR TEENAGER

Is your teen lackluster about school? Do you worry that she seems to be, not failing exactly, but disengaged or apathetic about class? If so, you're not alone. Many children lose their motivation during their teenage years, causing a lot of anxiety for their worried parents.

The good news is that there are plenty of things you can do to reignite your teen's love of learning. Here are some tips for jump-starting curiosity — with no lecturing, cajoling or battles over schoolwork in sight. 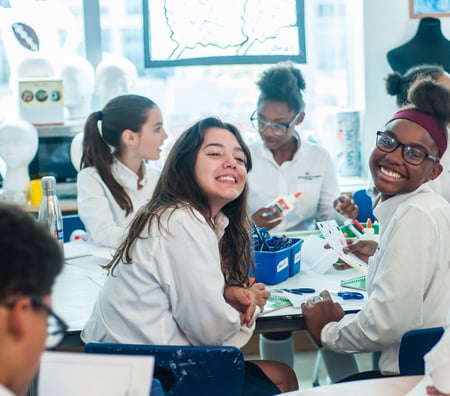 Adolescents, especially those in high school, are often perceived (negatively) as self-absorbed, reckless and defiant creatures who care more about impressing their peers than knuckling down to school work. But when teens do exhibit those traits, it's not necessarily because of a sincere lack of interest in school; rather, it's because of real changes happening in their brains.

During the teenage years, the pre-frontal cortex — the part of the brain that regulates a range of higher cognitive functions like decision-making, self-awareness and inhibiting inappropriate behavior — goes through dramatic development. Specifically, the brain starts trimming away the connections that aren't used regularly. It's a bit like pruning a rose bush; you cut away the weaker branches so the remaining branches can grow stronger.

This state of massive flux makes teenagers hypersensitive to the rewarding feeling of risk-taking. According to cognitive neuroscientist Sarah-Jayne Blakemore, teenagers are wired to focus on the actions that can positively affect them in the moment, rather than the actions that most adults would characterize as "correct." This explains why your teen seems so easily distracted away from studying.

Adolescents also register the impact of social exclusion more acutely than adults. This makes them particularly susceptible to peer pressure, since doing what their friends are doing is more likely to lead to social acceptance. For an adolescent whose friends smoke, for example, the immediate negative consequence of choosing not to smoke is rejection by the peer group. This far outweighs the future threat of cancer, even if the teenager understands the health implications of smoking.

Now that you understand what's going on in your child's brain, let's take a look at the tools you can use to help her maximize her potential.

Relationship-building is important for establishing an adolescent's interests so you can support your child's talents. Stop saying, "You're so intelligent, I don't understand what's going on," and try instead to listen. What really gets your teen excited and how can you encourage that? What anecdotes or experiences can you share that will help her explore this direction?

Adolescents are more engaged when the material they are learning is relevant to their world outside school, so look for opportunities involving real-world scenarios. Could you re-frame math to involve your teen's love of dancing, or join the dots between poetry and hip-hop? Teachers may help with this task. GEMS World Academy Chicago, a premier private school that uses the International Baccalaureate framework, makes it a priority to infuse real-world relevance into each unit of inquiry. Our teachers might have some ideas for parents who want to continue that approach at home. No matter how you do it, helping your teen to mesh his worlds will show him the practical value of school.

Create a vision of the future

Most teens pay very little attention to what might happen tomorrow, let alone 10 years from now. Help them to put the future in context by having them take a personality or a career aptitude test. When teens understand where their strengths and capabilities may lead them, they are more likely to see the value in learning and tackle their lessons with renewed motivation.

There's an app for that

Since teens already spend so much of their free time online, it makes sense to hook them up to the many apps and websites that gamify classroom skills. Two-player games have the bonus of providing competition and the opportunity for peer interaction. Teens respond to both extremely well.

Sparking your teen's curiosity need not be an impossible task. By encouraging what he likes to do within a context he can understand, you can lay the foundation for a lifelong love of focused learning.