Ask people to list the benefits of studying a world language in school, and they'll probably talk about enhanced communication skills and broadened cultural awareness — both of them essential traits in our increasingly connected world.

Research shows that there are other, perhaps less visible, benefits to studying a language. Learning how to communicate in a new language exercises specific cognitive "muscles" in the brain, experts say, and that can lead to improved memory, enhanced ability to interpret and analyze, and higher academic achievement in general.

Executive function, a high-level category of thought processing commonly referred to as "thinking about thinking," is influenced by bilingualism. In its quest to successfully use and organize more than one language, the bilingual brain becomes adept at processes like inhibition, or the disregard of extraneous and irrelevant stimuli, allowing the individual to prioritize focus. Bilingual study also improves working memory, as well as the capacity for purposefully shifting attention. As an individual becomes more adept at switching between languages, this skill is generalized, allowing the bilingual person to more easily m 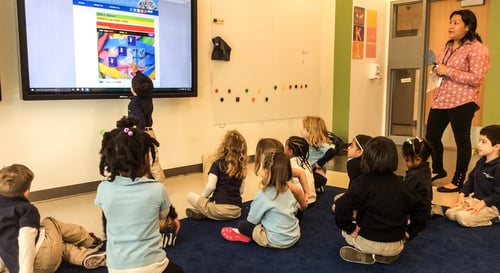 ultitask in areas not relating to language use. The bilingual brain also develops improved monitoring systems, as well as better interpretive and analytic abilities.

Learning a second language can also increase a child's ability to learn math. Bilingual students' well-conditioned basal ganglia, the portion of their brain that switches back and forth between languages, allows a faster response in bilingual students faced with unfamiliar math problems compared to monolinguals attempting the same work. Students in language immersion are often better at mathematical word problems because they are more adept at filtering out unneeded information and attending only to data relevant to answer calculation. Bilingual students also have an edge over their single-language peers when it comes to solving more complex math problems.

Learning more than one language in childhood has also been linked to enhanced nonverbal intelligence, such as creativity and visual-spatial awareness. Grade school language immersion students do well on their SATs, have superior problem-solving abilities and develop optimal communication skills.

Improved brain health is thought to occur as a result of second-language learning. Dementia and Alzheimer's disease are delayed in bilingual people by as much as 4.1 and 5.1 years, respectively. Noted structural differences include increased hippocampus size, greater inter-region connectivity and more frontal region "white matter," or myelin sheath, which insulates and optimizes the performance of neurons as they fire.

While exposure to bilingualism is beneficial at any age, it is generally agreed that earlier is better. Commencement of foreign language learning prior to puberty results in better phonetic awareness, as children begin to lose their ability to hear new sounds starting at around ages 8 to 12 years. Research shows that our brains process new languages differently depending on when we learn them. There are two key language centers in the brain, the Broca area (expressive language) and the Wernicke area (receptive language). Young brains use the Broca and Wernicke areas to process their second languages in the same way they learned their native languages, because their brains' linguistic wiring is still in progress. Once the brain completes the wiring, however, its use of Wernicke remains unchanged while it uses a new area of Broca to process an additional language. Although children exposed to a second language earlier in life (from birth) experience more neural alterations in the classic language areas, those exposed later in childhood have more response in the executive function area, or prefrontal cortex, indicating that children still derive benefits from foreign language learning, even when that exposure does not occur until a child is old enough for school.

Foreign-language learning offers children more than just the future ability to work in another country or culture. The numerous cognitive benefits associated with bilingualism enhance areas other than those influencing linguistic skill and, as a result, make language immersion education a viable option for parents wishing to bolster their children's chances of success.