TEACHER STAYS POSITIVE DURING, AND AFTER, CANCER FIGHT

Here I am, a 41-year-old woman, whose least favorite color has always been pink, living in a home suddenly filled with pastel pink. It’s funny how many things change when you hear the words, “you have breast cancer.” They definitely are not words I ever thought would pertain to me, nor did I think pink would be the color representing one of the most challenging times in my life. Yet, here I sit in my gray t-shirt with a pink, sparkly ribbon on it, proud to say I am a breast cancer survivor. 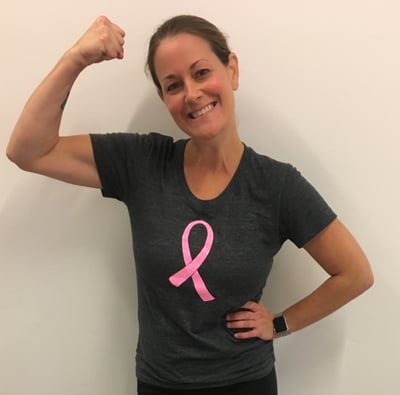 It all started back in February, when I was reminded that being 40 meant it was time to get my first mammogram.

I was nervous about how painful it would be, as I had heard horror stories from friends and family. I tried not to stress about it, though, because breast cancer does not run in my family and I felt healthy. I arrived at the screening ready to tackle whatever I would encounter that day, and I remember thinking it wasn’t so bad. That was until they called me back into the room to discuss my images. Another mammogram, two biopsies and three MRIs later, it was time to make some serious life decisions.

When I first heard that I had early-stage breast cancer, I was in a room of teenage girls I was coaching for Heart and Sole, an after-school running program focused on building self-esteem and confidence in young women. It was important to me to be strong and not let them see how scared I was, because I desperately wanted to be a role model of strength and courage. It was harder than I thought, and I probably didn’t do a great job at hiding my emotions.

On the way home that day, I let everything out. I cried the entire way as I told my parents, sisters and closest friends about my diagnosis. My mom said “Don’t cry, baby girl” over and over, but I could tell she also was trying to hold back tears. She never let me hear her cry, although I found out that she could barely speak when she was on the phone with one of my sisters later that evening. I can only imagine what it is like for a mother to find out that her youngest daughter has breast cancer. In that moment, and many that followed over the next few months, I realized how lucky I was to be surrounded by such an immense amount of love and support, both personally and professionally. Words truly can’t describe how grateful I am to everyone for their hugs, kind words and random acts of kindness.

It was a time of self-reflection, as well. My life has not always been easy, so if there is one thing I know, it’s that adversity makes you stronger. That is great and all, but in the meantime, I had some major questions to answer. Lumpectomy versus mastectomy? Radiation and hormone therapy versus a more holistic approach? What foods should I eat or not eat? Can I still donate blood? I know that one seems silly, but it was one of the first things I thought about because I was only two visits away from my 50th donation, which was something I spoke often about with my students.

And speaking of my students: Do I tell my fifth-graders about this? Making the decision to speak with 10-year-olds about your breasts is uncomfortable to say the least, but I knew deep down that I couldn’t keep such a huge secret from them. How could I stand in front of them every day with this weight on my shoulders? I just couldn’t do it. So, I decided to make it a “teachable moment” about life.

One of the many things I love about the International Baccalaureate curriculum is that teachers are encouraged to help children grow beyond academics. Thinking back to the moment when I told the students why I had been missing school so frequently, I can remember how sad their faces looked as they stared back at me, clearly concerned about whether or not I was going to be OK. It led us into a discussion about cancer stages and how I was lucky to have caught it so early, which wasn’t the case for one of the students in class who battled Stage Four cancer when he was younger. Comparing our stories really put things in perspective for them, and their body language slowly seemed less stressed. We continued to have some of the most meaningful conversations as I was going through this process, and I feel privileged to have been able to share my experience with them and the rest of my GEMS family.

Two days after my 41st birthday, I had a lumpectomy to remove the cancerous section of my left breast, which was followed by a week of recovery before returning to work. My collaborating teacher, who took over the class in my absence, told me how the students begged her to text me daily in order to share their concerns about my well-being and make sure I knew what was going on in class. Given that I am not someone who takes many days off, a week must have seemed like a really long time to them! To me, a week seemed like such a brief amount of time to heal both physically and mentally. I was able to return to work after that week, even though I knew my battle wasn’t quite over.

When school dismissed in June and everyone was excited for summer break, it was time to start my radiation treatments, which were a whole different experience. The timing was good in some ways, because one side effect of the treatments is fatigue, and teaching takes a lot of energy. On the other hand, as someone who loves soaking in the sun and swimming, it was difficult to be told I couldn’t do either – for the entire summer! The treatment sessions themselves were difficult because I, a person who always has a ton of energy, had to lie absolutely still on the radiation machine for what seemed like hours (in reality, it was just a few minutes). I got through it by reminding myself how lucky I was — lucky that I didn’t have to do chemotherapy, lucky that I had such caring people in my life at home and at work.

When you complete radiation treatments, the amazing doctors and nurses at Northwestern Memorial Hospital encourage you to hit the gong in the radiation oncology department. Each day when I passed the gong on my way out, I would quietly whisper how many days I had left before I could hit it. When that day finally came, I made the most of it. I banged the gong so hard, one of my nurses told me I probably just woke up every baby in the hospital! That was not my intention, but it sure did feel good. The video of me hitting the gong was hilarious, because you can clearly see by my facial expression at the end that I had no idea how loud it was going to be. I decided to share that video on Facebook, which was the first time I made my diagnosis public. In my post, I made sure to encourage people to laugh at my reaction at the end, because I wholeheartedly believe laughter heals. It was also the perfect opportunity to encourage all of my female friends not to miss their annual screenings, because my situation would have been very different had I missed mine.

I feel healthy now, and I am teaching a fresh group of students, loving my job more than ever. I want nothing more than for positive things to come from sharing my story with others, so that they, too, can feel as though they have the strength to overcome life’s many challenges. When people ask me how I managed to keep a smile on my face, I simply reply, “I’m one of the lucky ones.”

Taneal will be participating in the Pink Path Run organized by the Lynn Sage Cancer Research Foundation and sponsored by GEMS World Academy Chicago. The race takes place on Saturday, Oct. 14. Go here to learn about this event. In honor of their teacher, Taneal's fifth-graders have chosen Lynn Sage as the charity they will support for the GEMS PTO's annual fundraising gala in 2018.