WHY WE TEACH WRITING IN THE AGE OF TWITTER AND SNAPCHAT

At a time when so much information is shared via video content, hashtags or 140-character posts, it might seem that schools should devote less time to the teaching of writing. 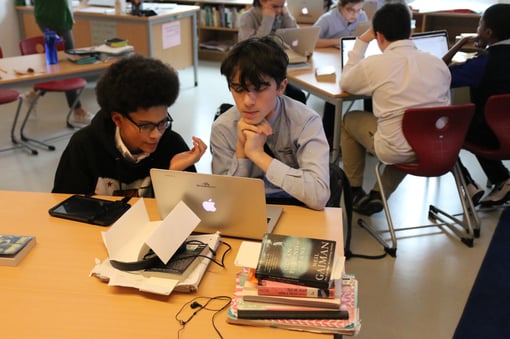 Educators and researchers say, though, that the teaching of writing is as relevant and important as ever, even in today's digital world. One of the key reasons cited is that writing remains very much in demand as a skill, both in college and in the workplace beyond.

Today's middle-school and high-school students will have to complete (and be judged by) cover letters and essays as they apply to college; once enrolled, students will have to demonstrate their writing skills in a number of ways, from historical essays to scientific abstracts. In the professional world, many different jobs require employees to compose reports, newsletter stories and other pieces. Some companies even request writing samples as part of their application process.

Also, professionals describe themselves on LinkedIn, and people with their own businesses assemble content for their websites. If those online materials are confusing or riddled with errors, it can make their creators seem amateurish. It might even make potential clients look elsewhere.

In addition, there is a growing body of evidence that shows that writing provides a number of cognitive and intellectual benefits that can help students succeed in just about any discipline.

For instance, writing can enhance memory. To produce a polished essay on a certain topic, students must really grapple with it, and the underlying concepts tend to stick in students' minds as they organize and revise their sentences. Indeed, in 2001, Harvard professor Richard Light released the results of a famous educational study, which asserted that writing engages students in material more effectively than any other classroom practice.

Further, writing helps students to translate and understand the world. The more students write, the more they grow accustomed to recognizing and remembering important details and analyzing everything they see, hear and read. In that way, the writing process becomes a learning process, a way to see the world more clearly.

Because habitual writing calms the mind, lengthens the attention span and leads to clearer thinking, it boosts general academic achievement. According to a meta-analysis from researchers at California State University, Northridge, the typical student who writes frequently performs better in school than the typical student who does not.

For these reasons and others, GEMS World Academy Chicago is among the schools that makes the teaching of writing a priority. GEMS supplements its International Baccalaureate curriculum with the "writer's workshop" approach developed at Columbia University's Teachers College. Students engage in a writing process that includes sharing work in progress, revision, conferences with the teacher and critiques from peers. 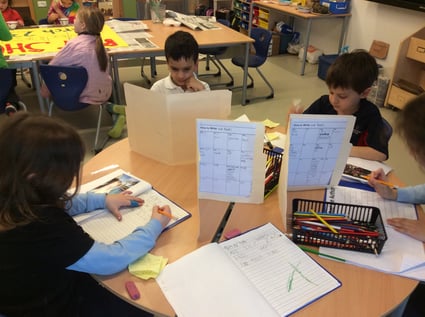 Bridget Porterfield, a Middle School teacher at GEMS, says that the revision process tends to be the most surprising one for her students.

"They're amazed that the last thing they put down on the page doesn't have to be final," she said. "That can be the hardest thing with them, because they often want to be 'finished' quickly. But they also have these moments where they think: 'Wow, this project is turning into something totally different than I expected.'"

Lisa Slater, a kindergarten teacher at GEMS, says that writing projects, particularly when completed within the context of the workshop approach, help younger students develop skills in listening, organizing and reflecting.

"You can see their minds really start working when they try to put their thoughts down on paper," she said. "They start reflecting on what's important to include, what can be left out, and why. Those are skills that they'll use throughout their education."

Writing as path to empathy and control

Educators and authors also point out that writing often forces one to explore alternative perspectives, which in turn leads to a more nuanced and empathetic view of the world. At the most basic level, as student writers compose and revise, they must keep in mind the perspective of the potential reader; as a result, writers begin to discern the connection they have with the audience.

Writers, especially those working on fictional or journalistic projects, must also try to understand the perspectives of the characters/people they're writing about. A well-drawn fictional character or real-life subject is the result, virtually by definition, of empathetic inquiry and exploration.

In addition, research is starting to show that when people write about painful experiences, even if they never share those passages with anyone, it can have therapeutic effects. In fact, medical researchers have found that it frequently alleviates the symptoms of various illnesses and mental health problems, including postpartum depression, post-traumatic stress disorder and asthma.

Why is writing curative? Most likely, it's because narrating the episodes of your life gives you power over them. Instead of being overwhelmed by those incidents, you summon the courage to confront them and make them part of a much larger story.

A craft on the wane?

It can be easy to observe people texting, tweeting or posting other social media updates and decide that the craft of thoughtful writing is on the way out. But with schools and employers continuing to stress the importance of strong writing skills, the craft remains very much alive. When educators establish rigorous writing standards in their classrooms, they enhance their students' powers of perception, reflection, judgment and analysis, all of which are essential skills in higher education and the global workplace. No matter what technologies lie ahead, sentences and paragraphs are sure to endure.